What To Do About A Fearful Dog 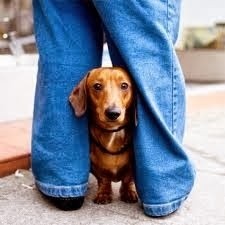 President Franklin Roosevelt once said, “The only thing we have to fear is fear itself.” He said this in his first inaugural speech in 1933, when the country was in the middle of the worst depression it had ever experienced, but his words still apply to this day.

He further described that fear as “nameless, unreasoning, unjustified terror,” which makes it sound pretty scary. When we feel fear ourselves, it can be paralyzing, preventing us from doing anything about it. And when we see other humans in fear, particularly children, our first, instinctual response is to comfort them, tell them it will be all right, and try to make the fear go away.

When it comes to our dogs, though, this is exactly the wrong thing to do.

This is because a dog relates your behavior to whatever it is doing in the moment, and it’s how positive reinforcement training works. If you want to teach a dog to “shake,” you have to associate that behavior with a reward until the dog instinctively knows, “If I do this with my paw, something good happens.”

To our dogs, affection is a reward. By comforting a fearful dog, you are rewarding what it’s doing in that moment: being scared. You cannot explain to a dog why it shouldn’t be scared, or tell the dog that the frightening thing won’t hurt it or is going away soon — they do not have the cognitive abilities to understand those concepts. What they do understand is, “I’m terrified and it’s getting me a reward. My humans wants me to do this.”

Over time, a timid, back-of-the-pack dog can be turned into a skittish, terrified animal because of humans unintentionally rewarding him when he’s in a negative energy state. Dogs don’t need love when they’re fearful; they need leadership.

Dogs exhibit what’s called allelomimetic behavior. What this means in simple language is that they learn by imitating. Normally, this kind of learning only happens between members of the same species, but because of the special relationship between dogs and humans, they also learn by imitating us.

This is why remaining calm and assertive when your dog is fearful is the key to helping them get over that fear — if they see that you aren’t scared by that loud noise or passing skateboarder or whatever, it will make them more confident. If their Pack Leader is ignoring the scary thing, then maybe it isn’t really that scary.

Remember, dogs have four instinctive responses to stimuli in the environment: fight, flight, avoidance, and surrender. A fearful dog exhibits either avoidance or flight: they try to either actively ignore or run away from the stimulus completely. Now we don’t want fight, which can sometimes be an extreme fear reaction — this is the classic “cornered animal” attacking viciously even though it’s scared to death. We want surrender, which is the dog simply accepting the stimulus without having a strong reaction to it.

It’s that calm, assertive energy that leads a dog to surrender, and this is the proper way to approach your fearful dog — with energy and actions, not words; by showing and not saying, “I’m in charge here. Everything is okay.”

There’s one other way in which we can make a dog’s fear worse, and that’s to feel fear ourselves. Remember, dogs learn by imitating, and a fearful Pack Leader will lead to an unbalanced and unpredictable dog. The dog may shut down completely in a terrified state, or she may become extremely aggressive toward anyone or anything that approaches.

This is because, when the human is fearful, the leadership role is empty and a dog’s natural reaction is to take over. To the dog, there has to be a Pack Leader. In the worst case scenario, it can take one incident of a dog reacting with fearful aggression to create a feedback loop that just makes things worse: The dog lunges at someone on the walk; the human becomes afraid that this will happen again; the human’s fear over the behavior does make it happen again; the human becomes more fearful and the process repeats.

Stay calm, and don’t be afraid!