Chaining Your Dog Up Is Plain Wrong 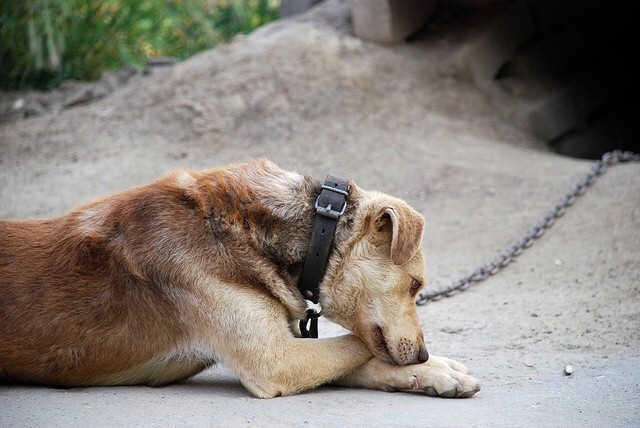 Chaining Your Dog is cruel, inhumane and has no place in our society that claims to be civilized. Dogs deserve better than being treated as unwanted garbage!

I am constantly surprised at the number of my clients who regularly chain or tie their dog in the backyard for long periods of time and then wonder why the dog is misbehaving on and off the leash.

Unfortunately, such tethering is common practice in the U.S. because of the less structured design of American real estate and common lack of fencing between properties. The well-meaning but misguided rationale I usually hear is that tethering is the only way for the dog to be under control outside without owner supervision.

Further, many clients have the incorrect belief that if the dog is outside most of the time, it doesn’t need to be walked and won’t suffer as much from lack of human contact.

Don’t make the mistake of thinking that keeping your dog in your backyard most of the day will replace his natural need for stimulation and get you off the hook for not walking him. In fact, it almost always does more harm than good, since the backyard becomes just another “room” in which he can quickly get bored.

At the mercy of kids, other animals

A study by the American Veterinary Medical Association in 2000 showed that 17% of fatal dog attacks on humans between 1979 and 1998 were from dogs that were restrained on their property by tethers at the time of the attack, and many of the victims were children.

So why are chained dogs more likely to bite, and why are the incidences of these attacks becoming so common?

Tethered dogs have a greater tendency to respond aggressively to an approaching person (even if it’s someone the dog knows), yet owners often seem unaware that continual confinement can cause immense frustration, which leads to increased reactivity or desire to chase and bite a person. Certain dogs are particularly territorial, becoming protective over space or property and putting anything approaching their territory at risk.

Dogs tethered in yards with no fences are much more accessible to the public, including children who often can’t resist touching or sometimes teasing a dog. Unable to increase the distance between itself and an approaching stranger, the dog has no option but to fight. Tethered dogs are also at the mercy of other animals that may wander onto their territory and are at risk of getting tangled in their tethers and being injured. 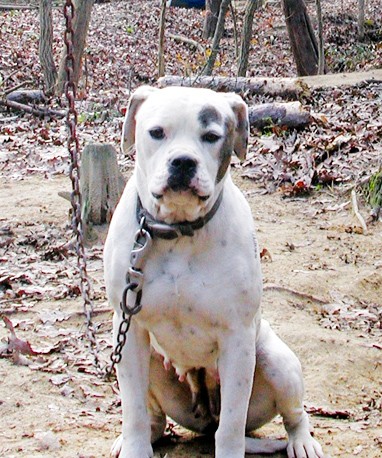 A dog is a social animal, so lack of social interaction can seriously damage its psychological well-being, causing a buildup of frustration and anger that can explode at the slightest trigger.

Other commonplace scenarios besides tethering can create what dog behaviorist Jean Donaldson describes as “barrier frustration.” Crate training is a popular and sometimes effective method of house training a puppy, but most dogs can’t cope in such a confinement. Lack of space can cause excessive anxiety, which manifests itself in whining, barking or chewing on the crate. Dogs that suffer separation anxiety often become more anxious in crates.

Owner and pet in a dangerous cycle

A dog can experience similar frustration on the leash. In normal circumstances, an unleashed dog would be able to put sufficient distance between itself and a fear source, but if the same dog is leashed and unable to increase distance, he will react or behave aggressively, hoping the fear source will go away. If his behavior is validated by success, he is likely to react in the same manner again. In response, the owner often becomes tense when walking and keeps the leash tight, transmitting the nervousness down the leash to the dog, effectively making the behavior worse. Dog and owner are then locked into a cycle of tension and leash-lunging that’s hard to change.

Many common behavioral problems could be avoided if owners understood how severely confinement can compromise natural behavior. Fortunately, local governments are becoming aware of the potential problems that chaining can cause for dogs and humans, and many cities and counties are making tethering illegal.

The key is to see the world from the dog’s point of view if we want to understand why dogs behave as they do. Only then can we truly identify the root cause of the behavior and humanely solve the problem using positive reinforcement.