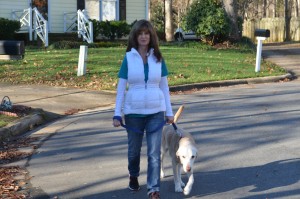 Recently I was working with a client and her dog at a near by park. We soon passed a walker with her dog that was clearly aggressive toward people and and other dogs. As soon as the dog lunged forward for my client’s dog, the owner roughly jerked her dog back and forced the dog to the ground by his head while at the same time yelling and scolding the poor animal.

As a avid animal lover and professional dog trainer , I was thoroughly shocked and taken back by response of the owner of this dog. Trying to keep my emotions in check I stopped training and approached the person and asked if she had ever considered a class for aggressive dog behavior. She promptly said no and then went into a discussion of how well this dog’s behavior had come in the last year. During our conversation it was quite obvious that she was proud of the control that she “falsely” thought she had over the dog. My goal during this conversation was to somehow reach this person inside and impress upon her, the negative impact that her own behavior was having on her dog. Instead of demonstrating calm leadership with her dog ,she was actually reinforcing her dog to become more aggressive .

To force a dog into a position by using physical force and emotional abuse is wrong and creates havoc. Our relationship with our dogs is to be built on mutual trust and respect. After all they are without a doubt most deserving of a positive pack leader. If we want our dog to remain our best friend, we owe it to them to be their best friend.