How to Correctly Discipline Your Puppy 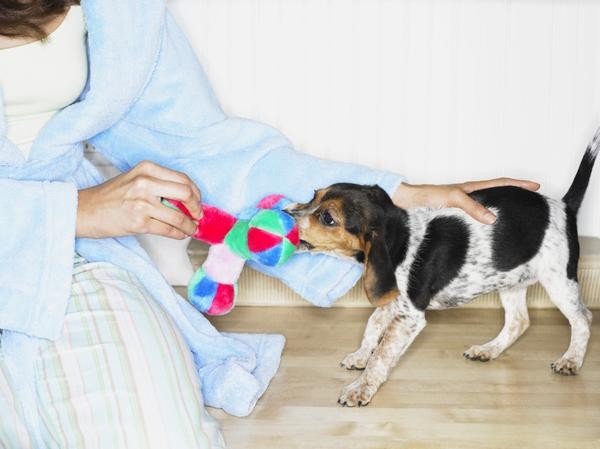 As the epitome of naughty deeds, puppies have ways of driving their pet parents mad. You wake up to find the garbage on the floor and your socks and shoes shredded. You sit on the couch and your pal jumps on up with you, despite you telling him he’s not allowed. Disciplining your puppy is mostly about positivity and a little about distraction.

Catch Him in the Act

The most effective way to stop your pup’s bad behavior is catching him red-handed. Sometimes that’s easy, as in the case of him sounding off with barks or jumping on people. But some bad behaviors aren’t so easy to catch until after the deed has long been done, such as trash-picking puppies and sheet shredders. Keep an eye on your puppy at all times. If you notice the house is silent and you don’t see the youngster, go looking for him. Puppies can quickly find themselves in lots of trouble when not supervised by their human parents. If you don’t catch your pup in the act, it’s impossible to discipline him. Disciplining involves modifying his response to a situation, which requires him to be in that situation at the time.

Think of bad behaviors such as getting in the trash, eating wires, tearing up pillows and eating cat litter as opportunistic situations. These are behaviors that are difficult to modify because it’s nearly impossible to reward the opposite behavior. That might sound confusing, so think of it like this: you can ignore jumping and reward your puppy only when his four paws are on the ground. He eventually learns that not jumping nets him way more rewards than jumping. You cannot ignore him eating cat litter, and there’s no opposite behavior to reward him for. To put an end to such behaviors, distract him with a quick and sharp “ah” when you witness the behavior, and find a way to keep him from engaging in the behavior. That might mean putting a lid on your trash, hiding wires in PVC tubes and keeping him in his crate when you leave the house. Chewing destruction should not persist beyond his teething months — around 3 to 7 months of age — unless he’s bored or suffers from separation anxiety.

Suppose your puppy latches onto your hand with his teeth. Replace your hand with a toy and give your pal lots of praise as he nibbles on it. If he goes for your hand again, jump up, ignore him for about 20 seconds and then offer him a toy. If he takes it, go back to playing with him. You want to ignore bad behaviors like those and reward good behaviors. Some behaviors don’t warrant all three actions of ignoring, replacing and rewarding, and some may call for a command. Consider couch jumping, for example. The moment your pup’s front feet touch the couch, stand up, say “off” and walk away from the couch. When he jumps off the couch, reward him with a treat.

Stopping your puppy’s bad behaviors requires consistency on your part. You can’t one day train him to not jump on people and then the next allow him to leap on whomever he wants. You can’t correct his mouthing during his teething stage and then turn around and think it’s cute when friends or family are over. Your puppy is much like a child, except he grows up a whole lot faster.

What Not to Do

Disciplining your pup should never consist of negative reinforcement. In some cases, negative reinforcement may work, but it will typically yield slower and less effective results. It can also cause your puppy to become fearful. Saying “ah” sharply to distract your pup is perfectly fine. Yelling at and smacking him is not.